In this gripping suspense-thriller, the daughter of a wealthy mayoral candidate and her friends are held for ransom by a group of daring criminals. Soon, as tempers flare and tension mounts, secrets rise to the surface revealing that these kidnappers are after much more than money. 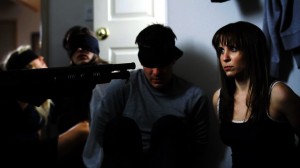 This feature-length film was photographed by Zac Murphy and edited by Lauren Connelly. For additional cast and crew information, visit the bios page.

“The Daughter” had its World Premiere on April 17, 2013 at the WorldFest–Houston International Film Festival. The film placed first in its category, winning a Platinum Remi Award. Marian Sorensen won the Critics Choice Award for Best Actress and the film was a Critics Choice nominee for Best Picture. In January 2014, the film screened at the Idyllwild International Festival of Cinema, where it was nominated for best picture, best director, best screenplay, and best cinematography. As of June 2014, Fabrication Films has sold “The Daughter” to China, Spain, Poland, Japan, the Middle East, and South Korea. Additionally, the film will be released in North America by Inception Media Group.