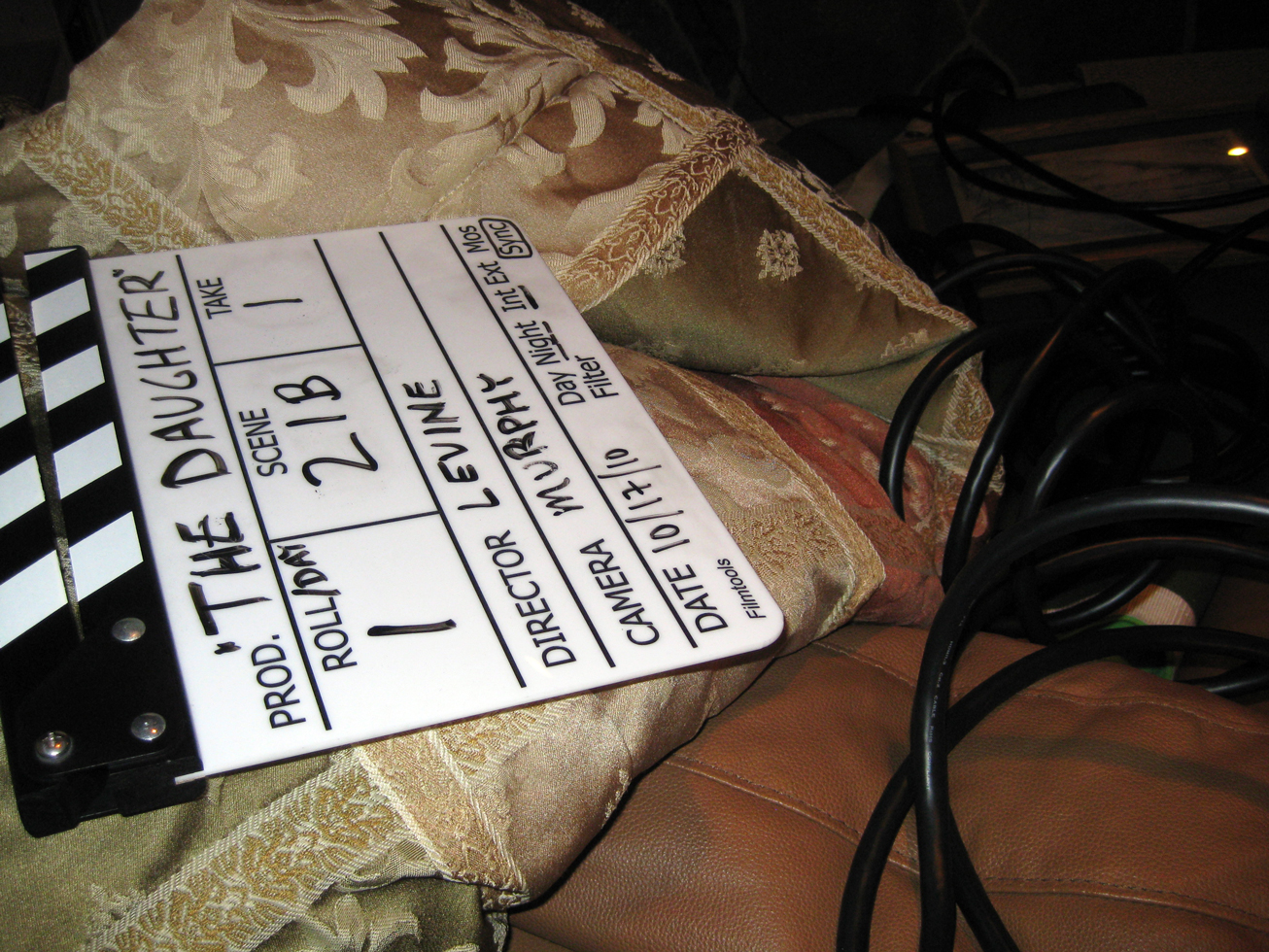 Graduating from the University of Southern California’s School of Cinematic Arts in 2008, Jonathan M. Levine found himself entering the workforce during a recession and the aftermath of the Hollywood Writer’s Strike. He was developing scripts with studios and production companies but these projects were unable to gain much traction in the current economic climate. Stuck in “development Hell”, Levine, along with other key members of the film’s production, missed creating their own projects. “We had this entire group of young professionals who were incredibly talented but weren’t being given the opportunities they deserved,” says Levine. The film’s producer and star, Marian Sorensen had great confidence in their team, having admired the high production value of their previous work. “I knew how talented everyone was from seeing the work they had created at USC with absolutely no budget,” says Sorensen, “The key component was finding a story that we could tell well within our production parameters.” 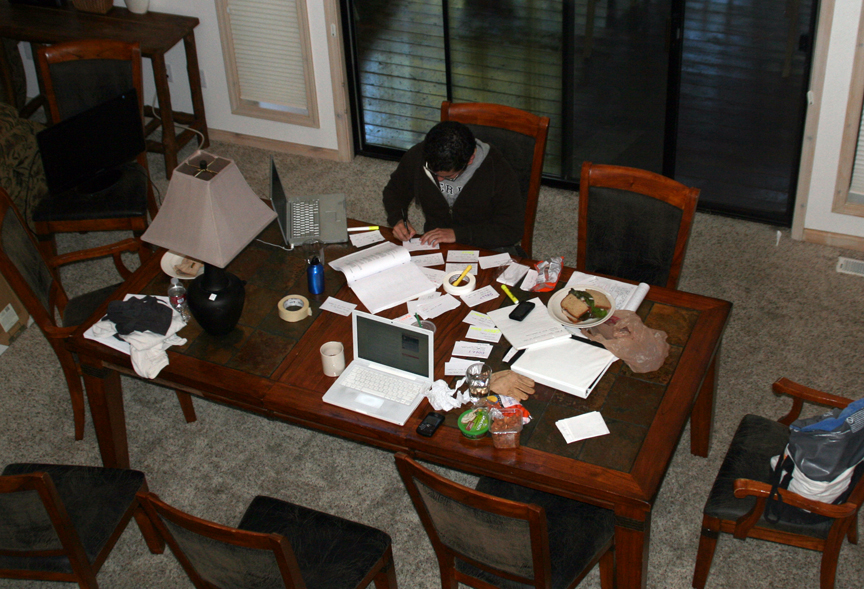 Inspired by great 90s thrillers like “The Fugitive” or “The Negotiator”, Levine began writing “The Daughter” in May 2010. They had access to a great house near Lake Tahoe built by Sorensen’s grandparents, which would serve as the principal location for the story. “The philosophy of the production from day one was ‘use what we have’,” recalls Levine. “There was no budget for sweeping locations or special effects so everything was going to have to rely on story and performance. Plus a few filmmaking tricks picked up over the years.” 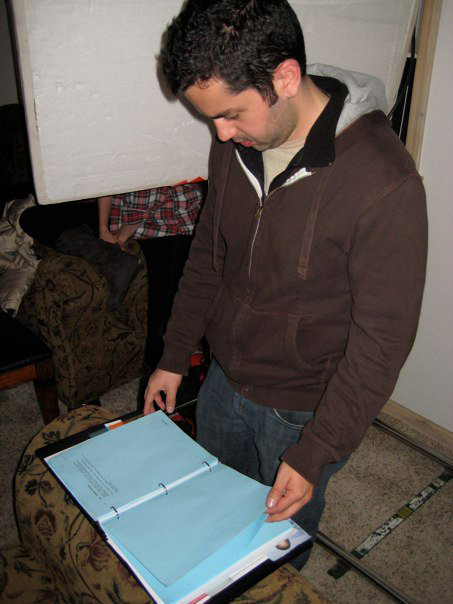 Levine describes the story as the journey of a young girl who is trapped, both physically and emotionally: “She’s struggling with trying to reconcile who she was, who she is and who she wants to be.” Levine was able to use the compelling script to attract strong talent in front of and behind the camera. Award-winning actor Drew Howerton, who plays the vengeful Robert Michaels, remembers his first impression of the script: “Other than that I was wearing a mask until page 70? I thought Jonathan had written a tight thriller that smartly made use of a handful of locations and, in the best way, felt a bit like a throwback.”

“With ‘Independent Films’ you usually get scripts that you have fight to stay awake just to get through them,” says Stephen Bowman, actor and make-up artist, who has over a decade of experience working with some of Hollywood’s biggest celebrities, “But with this script I found the characters and plot captivating and I was done reading it within an hour.” 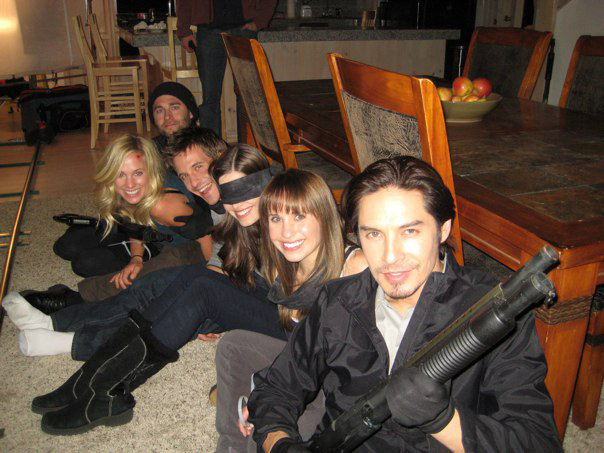 The cast was very carefully selected by the director and producers. “Being the best actor for the role wasn’t the only criteria,” says Producer Trevor L. Nelson, “Because this was going to be an intimate location shoot, it became more and more about ‘Can I live with this person for weeks and weeks in the mountains of Lake Tahoe?'”

While Levine wrote the script with a few actors already in mind, including Marian Sorensen as the lead Rian Fielding, many of the actors were new to each other and the production team. Producer Logan Burdick: “Putting together a great ensemble cast is a complicated and nuanced process, but I think all our actors played off each other wonderfully. Their onscreen dynamic was so strong, that it quickly created lifelong offscreen friendships. That’s a real testament to their chemistry.” 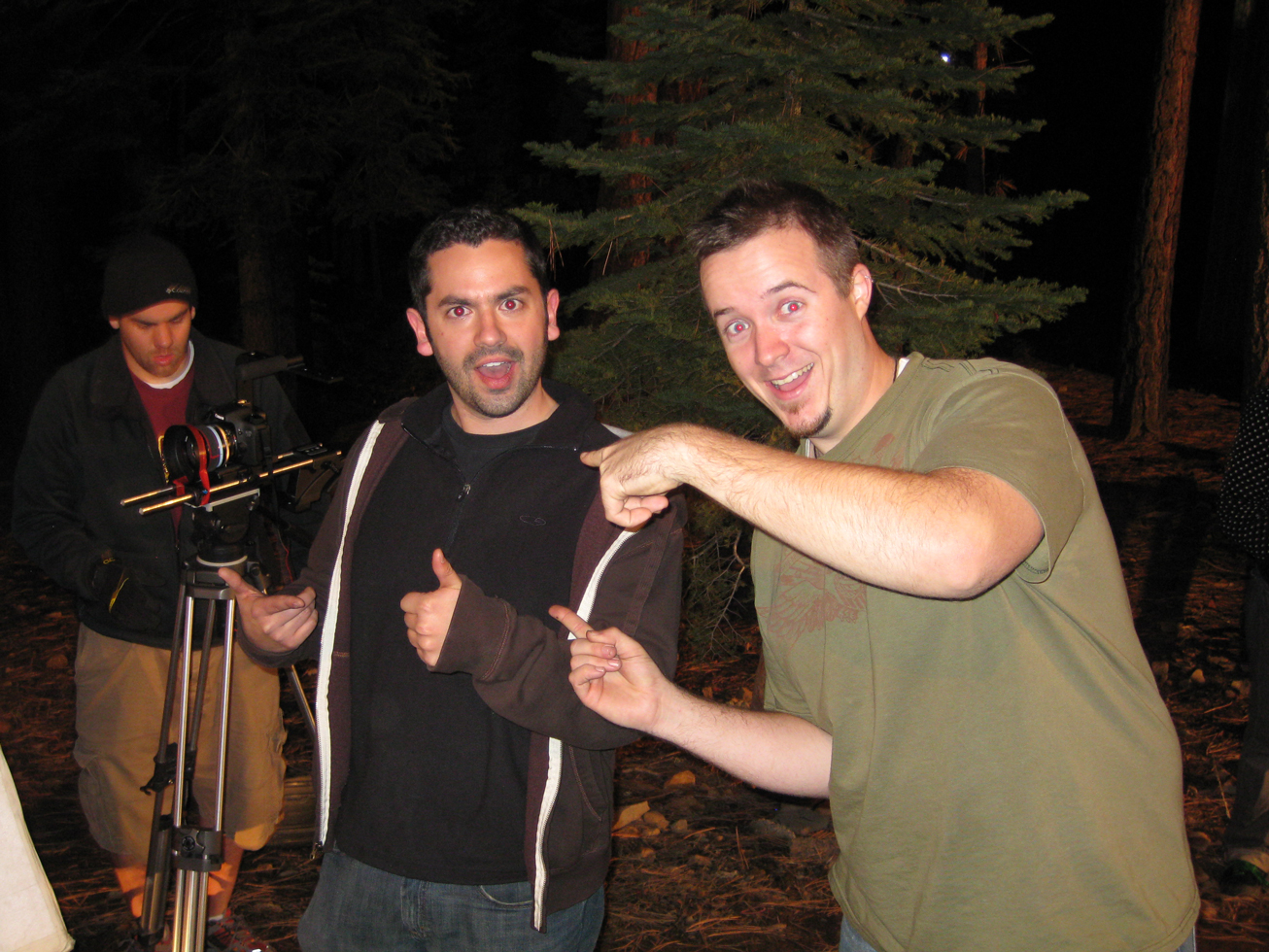 With a limited crew, many members of the production team had multiple jobs to fill. Joe Sofranko played rambunctious Ian Leel and also served as stunt coordinator behind the scenes. “Especially on an indie set, everyone really has to be selfless and giving, not complain, and that’s what everyone did… because we all believed in the project, everyone chipped in and helped make it work.”

Looking back, Sorensen recalls how daunting the workload was for such a small crew: “Jonathan would finish shooting at 4am and then go buy plane tickets and make travel arrangements for the next batch of actors flying in the next day; (Producer) Alex Darke would be helping as a gaffer all night then run out to buy or build props; and I would finished filming an emotionally-heavy scene, then go organize actor’s paperwork and wardrobe. It was the hardest thing I’ve ever done, but it’s also the best thing I’ve ever done.” Says Howerton: “It was refreshing and invigorating to be around. Everyone on ‘The Daughter’ was there because they wanted to be.” 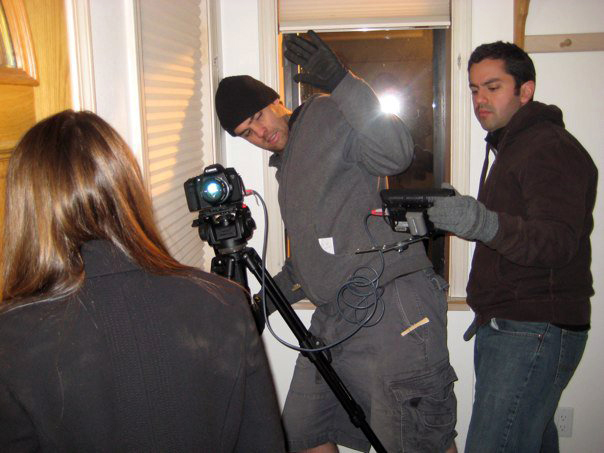 Working with Levine, Director of Photography Zac Murphy decided to shoot the movie using Canon’s 5D Mark II and 7D cameras, using beautiful Nikkor AIS lenses manufactured in the 70s and 80s. “Aside from his great narrative work, Zac has years of experience shooting indie documentaries,” says Levine, “I knew his style would help keep the movie visually-compelling, especially since a large part of the film takes place in one house.” However, the scale of the story compared to the budget left Murphy initially reluctant. “I wanted to shoot for Jonathan but it was hard to wrap my head around how we could pull it off; luckily he had an angle,” says Murphy, “We started breaking down the obstacles and slowly turning them into possibilities. Generally, I was impressed with his fortitude, vision, and speed with which he set out to accomplish the seemingly impossible.” 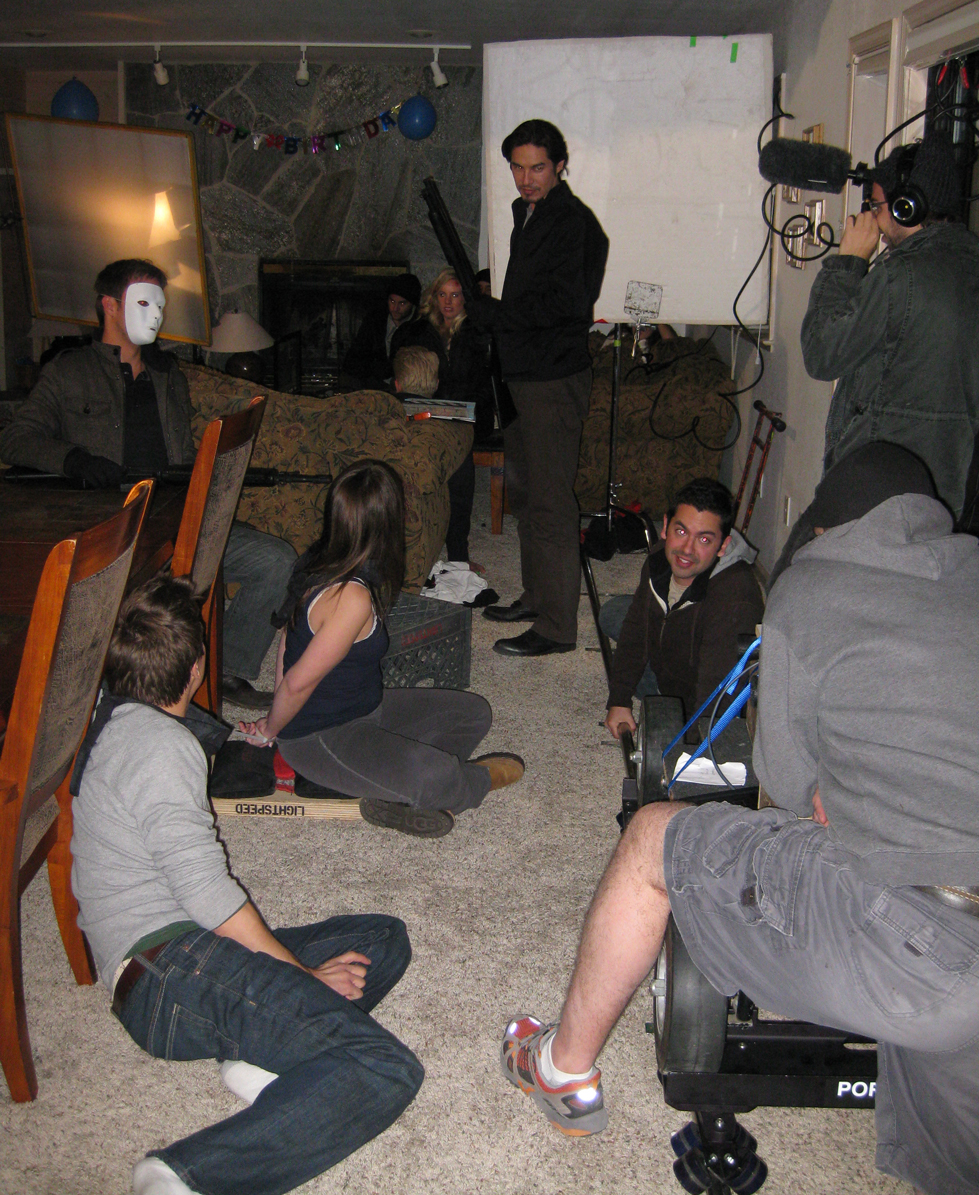 Principal photography for “The Daughter” began on Sunday, October 17, 2010 in Truckee, CA. The first 13 days of shooting occurred at the “Fielding family home” near Lake Tahoe, then headed south for five more days of shooting in Los Angeles, Monrovia, and Beverly Hills. 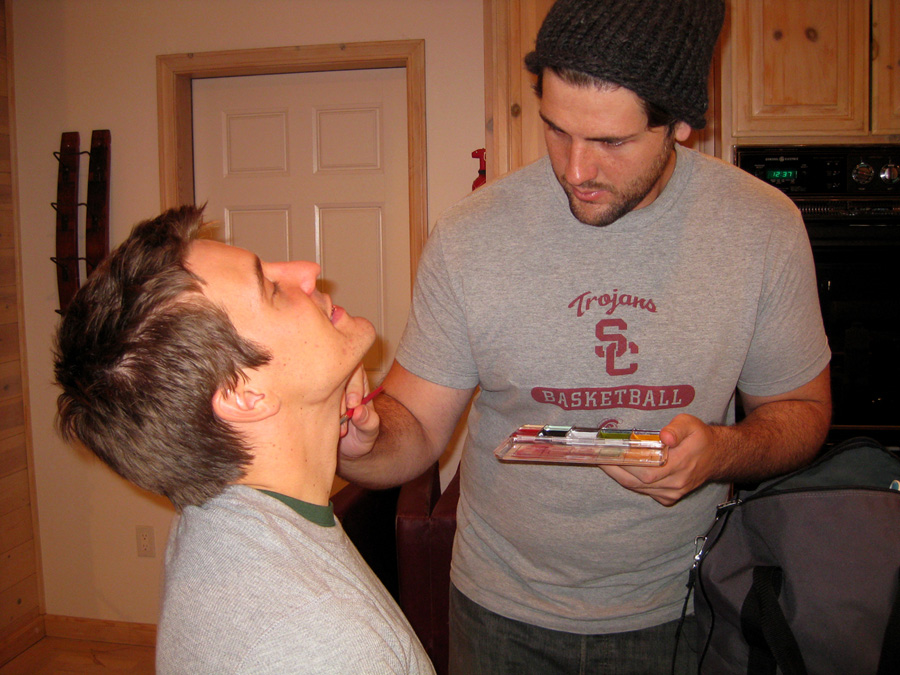 “We had to shoot wide open for most of the scenes to keep the DSLR noise levels to a minimum and our cast was wonderful because they essentially had to maintain perfect blocking for each and every take,” says Murphy, “We needed to light for a lot of movement and at the same time we didn’t have a lot of light. You could say that the film’s look emerged from our constraints which I tend to love struggling with. Jonathan wrote in distinct lighting scenarios to help break up the monotony of shooting in a living room the entire time. “ 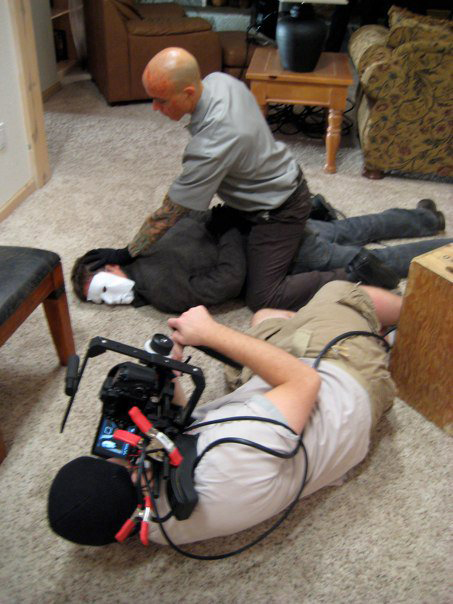 To accommodate budgeting and scheduling concerns, the shooting schedule would ultimately be split into two parts with a built-in hiatus allowing everyone to return to their normal, higher-paying “day jobs”. In the interim, editor Lauren Connelly began cutting footage. “While we did have some major set pieces still remaining, Lauren was able to produce a cut of the film up to that point which allowed us to gauge what pick-ups or reshoots might be necessary,” says Levine. “It was invaluable and gave a great, focused energy to the second half of our shoot.” 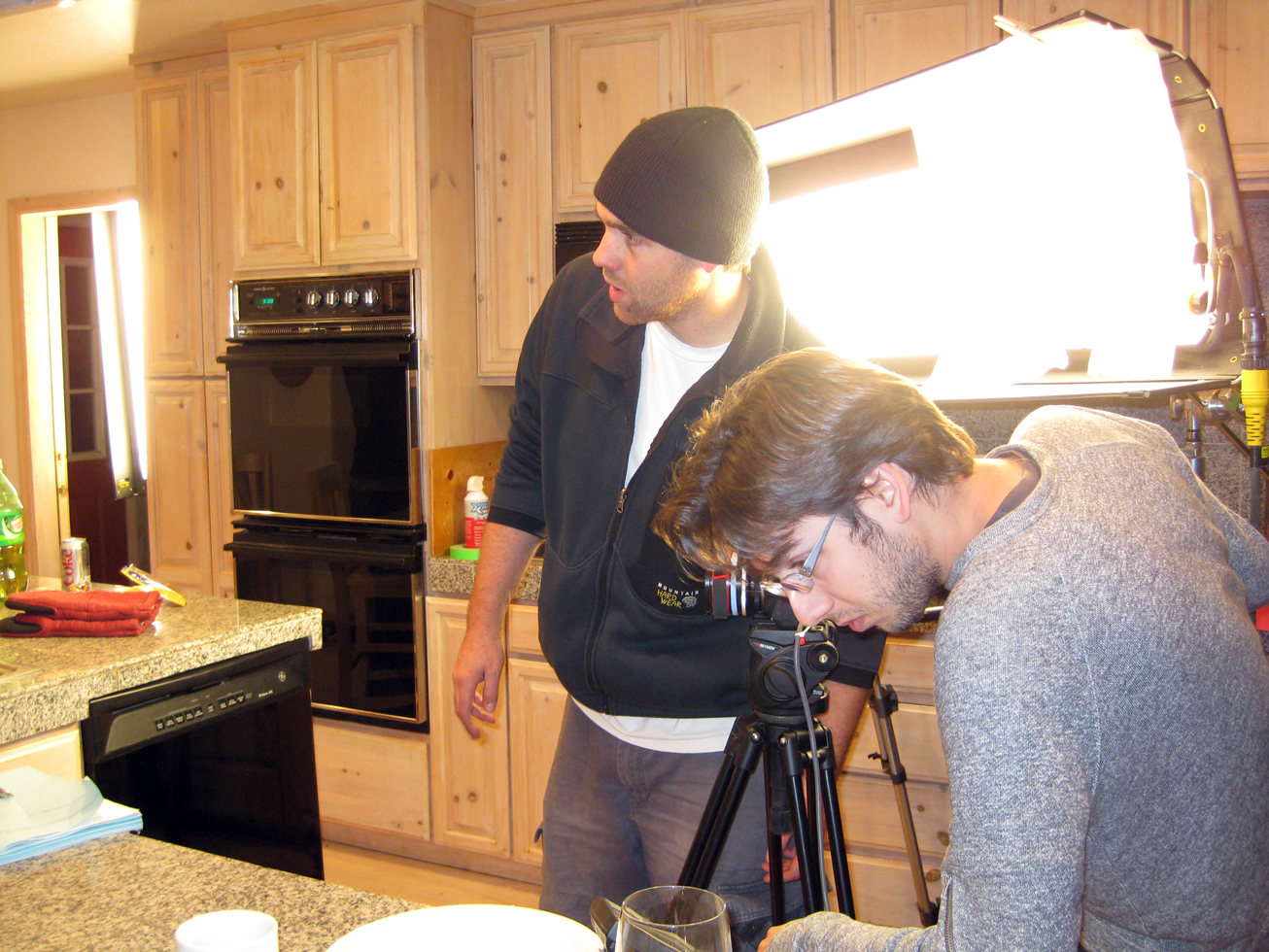 Production resumed on April 21, 2011 in Los Angeles before traveling back to northern California. They would continue shooting in Truckee before traveling to Los Altos, near Palo Alto, for interiors and exteriors to build out the film’s fictional town of St. Sebastian.

“The Daughter” wrapped shooting on June 26, 2011 in downtown Los Angeles after 32 days of shooting spread out over nearly nine months. “We had all been sleeping the same weird hours and shooting until 7 am, so it was like we were all going the same type of crazy…which helped us bond,” says Sofranko with a smile, “By the end of shooting, it felt like a family.” 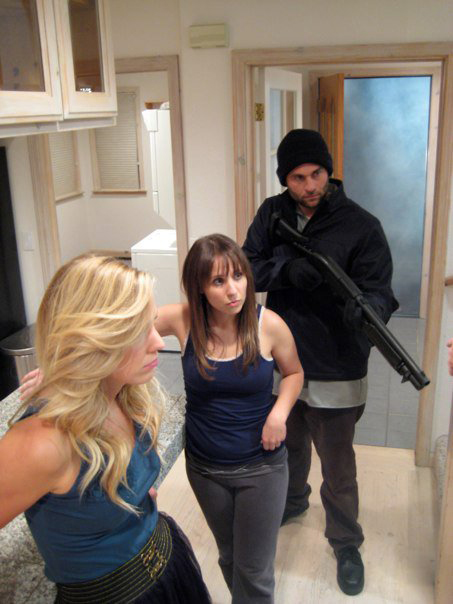 Levine worked steadily with Connelly during the last half of 2011 to complete the film. At the time, Connelly was working as an assistant editor for major Hollywood projects and would only be able to cut during the evenings. While this may have extended their post schedule, it also gave the team ample to time to explore and experiment to find the best possible presentation of the story. 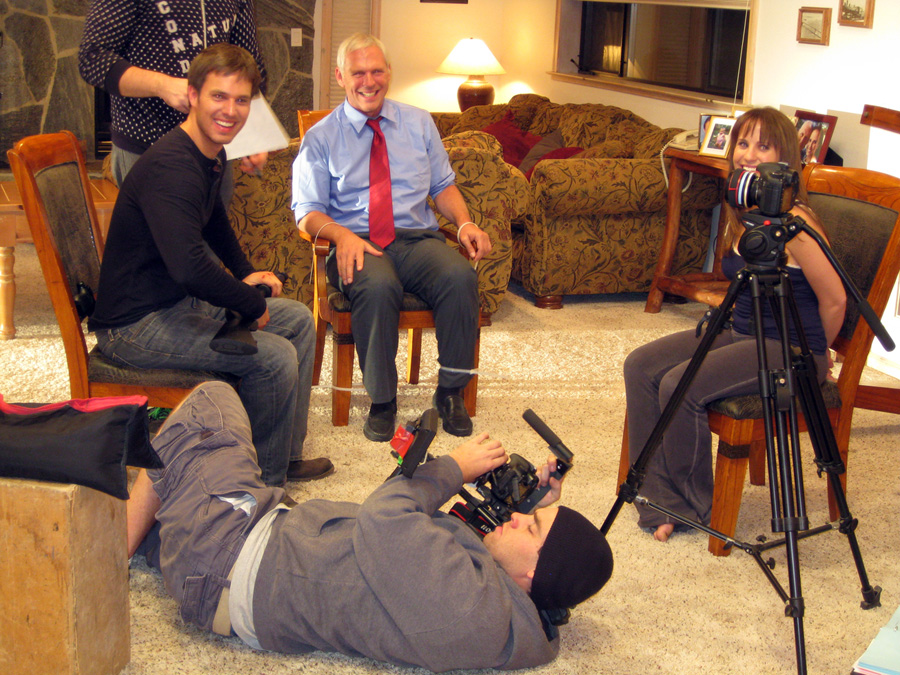 Meanwhile, Kenny Levine, Jonathan’s father, was brought in to score the film. “Jonathan always has a clear, decisive idea of where he wants to go,” says Kenny who, in addition to scoring projects for film, TV, and radio, is the band-leader of the popular southeast band KTG, “After discussions about the texture of the score we narrowed down the instrumentation to best utilize the limited budget. Certain instruments lend to the ‘feel’ of this movie and once we came up with that direction I started to come up with certain themes and motifs to present.”

As Mike Hough finished his sound design work in Shanghai, China then handed it off to re-recording mixer Tom Boykin to solidify and finish in the states, Levine would find himself with a new role on the film: colorist. “Zac got called off to shoot a big project in China so I stepped in to color the film,” says Levine. “After working so closely with him to develop a look for the movie, it was exciting to be able to apply the finishing touches to make sure it was the best it could be.”

“The Daughter” had its World Premiere on April 17, 2013 at the WorldFest–Houston International Film Festival. The film placed first in its category, winning a Platinum Remi Award. Marian Sorensen won the Critics Choice Award for Best Actress and the film was a Critics Choice nominee for Best Picture. In January 2014, the film screened at the Idyllwild International Festival of Cinema, where it was nominated for best picture, best director, best screenplay, and best cinematography. As of June 2014, Fabrication Films has sold “The Daughter” to China, Spain, Poland, Japan, the Middle East, and South Korea. Additionally, the film will be released in North America by Inception Media Group.

The filmmakers look back on their experience fondly. “I’ve shot over 35 films now and even while this is one of the lowest budget features I’ve ever worked on, I’d have to say it turned out to be one of the best,” says Michael Teh who plays the villainous and calculating kidnapper Daniel Lathem, “Everyone in the film, in front of and behind the camera has much to be proud of.” Drew Howerton agrees: “I honestly had a blast making this movie. There was so much laughter. There was the time when Stephen Bowman attached clothespins to his nails and pretended to be Freddy Krueger offscreen. I had nightly entrepreneurial think tanks with Logan where we planned a popcorn empire and I wrote a rap about Frank Lloyd Wright.” 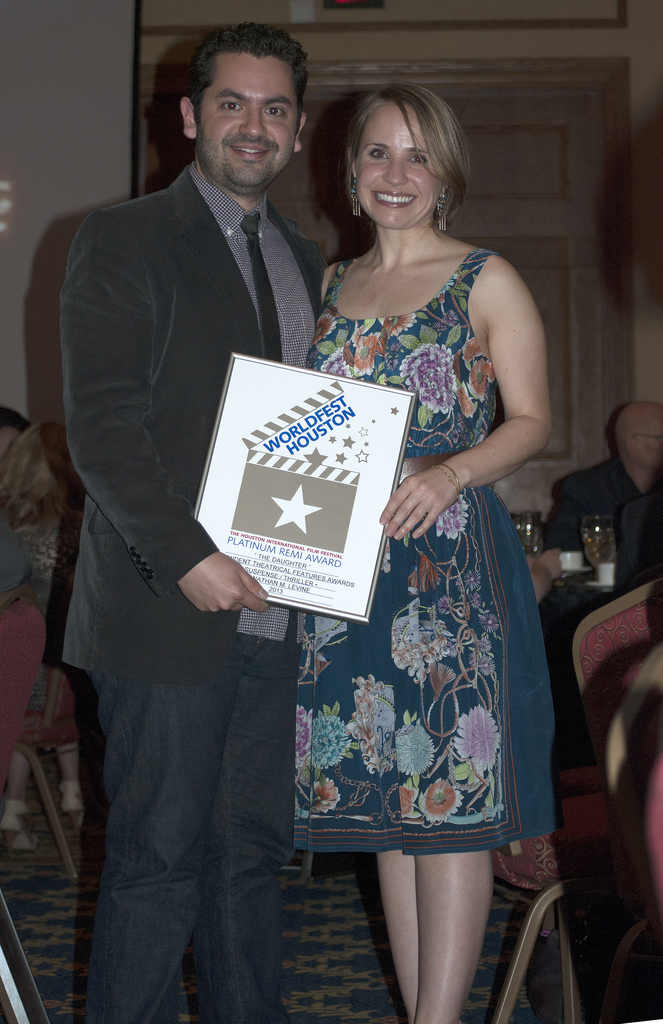 Finally, Zac Murphy shares his favorite memory of the shoot, which also encapsulates the entire production’s filmmaking strategy: “I think the one moment that stuck out the most was when we were trying to find the opening interview studio location. Nothing was really working and we couldn’t just rent a studio and fill it with extras. Jonathan finally made the call to shoot it in his living room no matter what. I remember showing up and scratching my head then it dawned on me: Jonathan had this huge mirror along the front door wall. We emptied the room and basically shot through the mirror to double the sense of space and had people walk back and forth silhouetted to create the idea that they were stagehands. What I love about that particular challenge is being able to shape a reality with only a few pieces. It’s moments like those that really bring you back in touch with why we started in this business in the first place. “


Please visit our NEWS page for the latest updates on the film.