DECEMBER 21ST, 2011–Director Jonathan M. Levine and editor Lauren Connelly have completed their second full cut of the film. Now running at 84 minutes, this cut will be screened for small groups of friends and family over the next month. This will be the first time anyone outside the production has seen the film so the filmmakers are looking to gauge what elements are working and which ones need to be restructured.

Based on the notes from these outside audiences, a final cut of the film will be completed in February 2011. It will then be sent to Shanghai, China where director of photography Zac Murphy and sound designer Michael Hough will color time and complete the sound effects for the movie, respectively. 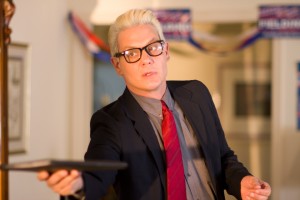 With the color, Murphy’s goal is to make sure the look of the film stays consistent both as a whole and within each individual scene. He also has to make sure every frame of the film adheres to the broadcast color standards, which is a requirement with almost all distribution companies.

Meanwhile, Hough has to clean and match all of the audio recorded during principal photography as well as build the soundscape of the entire world. Everything from gunshots to car horns to crowd noise has to be added in and he will even have to create some of the effects himself. Many of the actors will be called back to loop their lines to ensure the audio quality is perfect.

Composer Kenny Levine will begin his work on the film’s score next week. In addition to discussing the overall feel of the soundtrack, he will be meeting with Jonathan to go over every single moment in the movie that will require musical score.

Once the final picture and sound are delivered, a final mix (one in 5.1 surround sound and a stereo mix for all DVD film festival screeners) will be completed. The production team is currently searching for a sound mixer in either Los Angeles or Shanghai to complete this essential task.

We anticipate “The Daughter” to be completed in Summer 2012.